Growth Hacking: What it Really Means 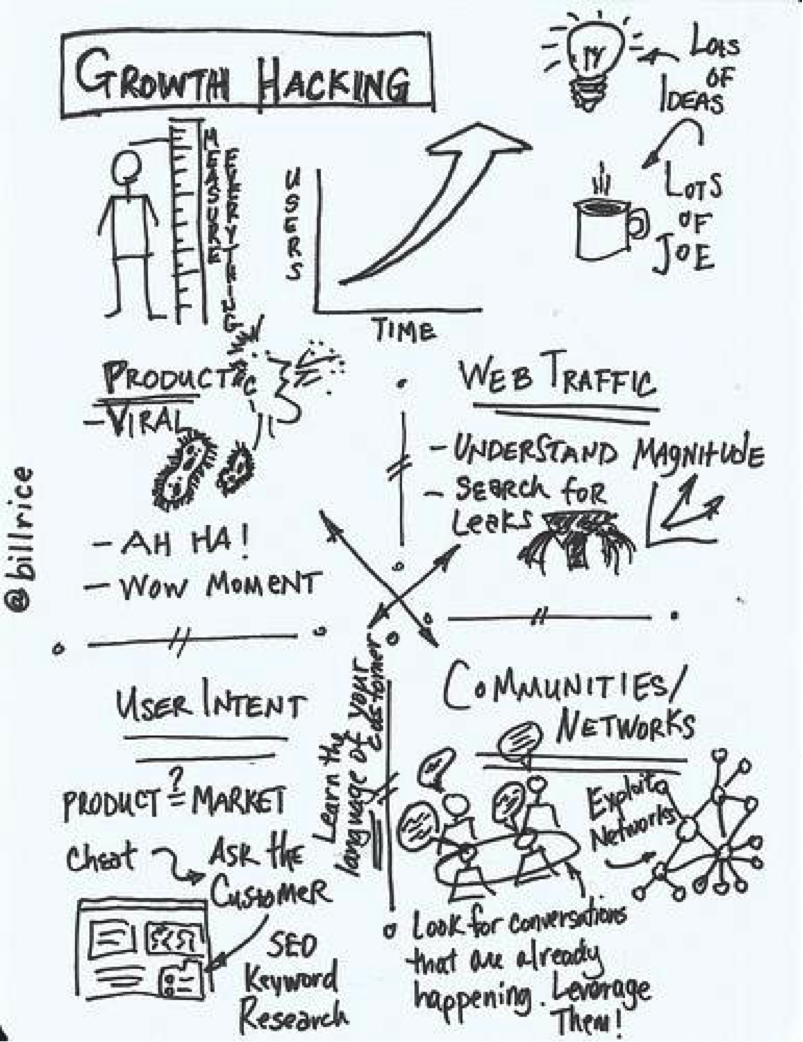 Growth hacking throws old, outdated notions about marketing, advertising, engineering, and the like out the window in favor of growth tactics that are measurable, testable, and most importantly, scalable. Instead of focusing on abstract ideas like brand awareness, growth hackers have their eye on a very specific goal and engineer specific solutions to achieve it. Growth hacking enables modern businesses to take a far more scientific approach to moving a company forward; one that starts with essential building blocks, systematically scales to accommodate growth, and eventually takes on a life of its own. In other words, if you want your business to grow, growth hacking is the recipe for success.

Growth Hacking Helps You Accomplish Your Goals In Unordinary Ways

Many different definitions are presented to describe what growth hacking really is; many focus on the process of growing a company using tactics, or “hacks,” that create scalable, sustainable growth. Many definitions highlight the notion of increasing the viral coefficient as a key focus of growth hacking, but growth hacking is really much more than that.

Growth hacking is the process of engineering solutions to fulfill a company goal. Often, that goal is growth, but it also might be something like reducing the rate of customer churn or even something highly specific, such as a hack designed to identify and engage influencers on Instagram. Growth hacking goals all share one thing in common: They are specific tactics used to propel the company forward in the pursuit of a goal.

According to Sean Ellis, the man who originally coined the term “growth hacker,” in 2010, “A growth hacker is a person whose true north is growth.  Everything they do is scrutinized by its potential impact on scalable growth. Is positioning important? Only if a case can be made that it is important for driving sustainable growth (FWIW, a case can generally be made).”

Companies all share one thing in common: a need for growth, preferably rapid growth. Growth hacking originated as a practice more commonly used in high growth technology startups but more and more established companies are benefiting from growth hacking tactics to increase product distribution, grow their user bases, ramp up their content or listings, expand their presence, retain more customers, or achieve some other specific goal.

The businesses that are major brands today: the Facebooks, Twitters, Airbnbs, and Amazons of the world, didn’t achieve massive success through growth tactics akin to throwing spaghetti against the wall in hopes that something would stick. They took a scientific approach to building systematic, scalable, and reliable tactics into their products from product design to invisible algorithms running on the backend.

Every company has goals. Employing growth hacking tactics means you’re willing to try innovative, even never-been-done tactics to achieve those goals. Your focus is the end result, regardless of how you’ll get there. According to Mattan Griffel, a partner at GrowHack, “Growth hacking is what happens when you take lean to the next level, beyond customer development and product-market fit. It’s what lean companies do once they’ve found product-market fit and now need to grow.” If your business has any type of growth among its goals, growth hacking is the way to achieve it.

How to Use It

Growth hacking is not a one-size-fits-all solution. There is no defined set of secrets shared by some select group of growth hackers used to facilitate explosive growth for modern organizations. In fact, growth hacking tactics may not even work for every company at every stage of growth.

That’s the message Raad Mobrem shares in “Why Growth Hacking Won’t Work for Every Company,” on Entrepreneur. As a co-founder of Lettuce, an online inventory and order management system, Mobrem made a few mistakes while trying to make growth hacking work for his company. First and foremost, growth hacking doesn’t often work for underdeveloped products or those that don’t yet solve the problem for their target users.

Step 1: Begin with the End in Mind

For many, many years, marketing was applied only after products were fully developed, launched, and, in the case of tangible products, manufactured. Growth hacking, on the other hand, requires substantial forethought and a precise product-market fit. That means the product must work, and it must meet an unmet need in a hungry market.

What problem are you trying to solve? One of the most common problems solved by growth hacking is that the company does not have enough customers or users. But growth hacking solves an infinite number of potential problems for startups and established companies. Perhaps your company is losing too many customers, necessitating the development of innovative ways to boost customer retention. Maybe visitors aren’t converting, or customers are not spending enough money. Whatever the problem, clearly define it and work backwards towards a solution.

Step 3: Identify Your Opportunity for Growth

Taking advantage of loopholes and hidden opportunities is the key to successful growth hacking, but the strategies employed from any one company to the next will rarely — if ever — be the same. It might be something that’s never been done before. It might be something that’s proven effective for other companies and is a perfect fit for your product and market, a tactic that you can spin in a unique way to make it your own. Whatever the case, this opportunity should capitalize on and leverage the strengths of your product or tap into a viable market.

Step 4: Be Willing to Venture into Unchartered Territory

The founders of Airbnb, which is now a household name, employed growth hacking tactics to get the company off the ground. First, they designed and sold special election-themed cereal boxes to raise initial capital. But Airbnb’s most notable growth hack was offering its users the ability to cross-post their Airbnb listings to Craigslist, effectively tapping into Craigslist’s massive user base — which also happened to be Airbnb’s target market.

Craigslist ultimately caught on and put a stop to this hack, but the now-infamous Craigslist hack is still largely attributed as a key driver of Airbnb’s early growth. This willingness to go outside the ordinary and try innovative methods to tap into key opportunities to fuel growth is the core of growth hacking.

Growth hacking is based on measurable tactics, meaning you get real data on the success or failure of every growth hacking tactic you implement. It’s similar to The Lean Startup philosophy: Experiment, test, and stop using tactics that aren’t working while trying again with something new.

That said, experiments undertaken through the process of growth hacking are rarely based on whims or hunches. These experiments are more likely to work because they’re driven by data from the start and engineered precisely to solve a specific problem. Still, not every growth hacking tactic will work for every company. If the first attempt doesn’t stick, return to the drawing board and draw more inspiration from your available data.

The Origin of Growth Hacking

As mentioned earlier, the term growth hacking, specifically “growth hacker,” was coined by Sean Ellis in 2010. Ellis was responsible for facilitating rapid growth for well-known Internet startups like Dropbox, where he set up systems, processes, and even mindsets for companies to continue growth after he moved on. But finding replacements who could continue leading growth hacking measures for these companies proved challenging, and searching for traditional marketers wasn’t cutting it.

As Neil Patel explains in “The Definitive Guide to Growth Hacking,” the Internet truly paved the way for the emergence of growth hacking as the term “product” took on a new definition. In the Internet age, no longer does a product have to be a tangible good like deodorant, cheese, or televisions. Some of the most popular products in the modern environment are intangible, such as social media platforms like Twitter and Facebook, software like Hootsuite and FreshBooks.

Today, distribution channels rise and fall at ever-increasing speeds, and they can become saturated seemingly overnight. “In response to channel instability and channel saturation, growth hackers quickly test and scale to be the first mover in a new channel and to rethink established channels to create new opportunities. A core element of growth hacking is testing new distribution paradigms,” explains Aaron Ginn. In a way, growth hacking grew out of necessity.

According to Gagan Biyani in an article for The Next Web, “Growth hackers utilize analytical thinking, product engineering and creativity to significantly increase their company’s core metric(s).” The intangible nature of many modern products, as well as the growth of the Internet and digital media, paved the way for different approaches to the traditional marketing and advertising strategies companies used to rely on to achieve growth.

The rapid growth of many of the world’s best-known Internet companies like Facebook, Airbnb, Amazon, and many more, can be attributed at least in part to growth hacking. Even after Ellis first coined the term in 2010, growth hacking didn’t really catch on as a buzzword until April 2012 when Andrew Chen wrote an article called “Growth Hacker is the new VP Marketing.” In this article, Chen makes clear what was becoming obvious in the marketing world, particularly in the tech startup space: Technical expertise and coding prowess are essential chops for modern marketers.

The rapid growth of companies like Facebook and Uber may seem happenstance, but this exponential growth is no coincidence. Suddenly, it’s possible to catapult a startup to success seemingly overnight with the use of systematic, scalable tactics that fuel rapid acquisition, adoption, retention, and referrals.

Growth hacking tactics are the key to rapid, exponential growth for modern companies. While growth hacking doesn’t look the same from one company to the next, developing innovative ways to achieve specific business goals is the recipe for extraordinary success that’s rapidly changing the field of marketing. Growth-oriented companies become overnight sensations by no accident. The great part about growth hacking is that it can be applied to any type of business–whether it’s a consumer packaged goods brand, an e-commerce site, or a company selling software as a service.